A few days ago I took my two youngest boys to the park closest to where we live. It’s a really nice park, or could be if older teens didn’t ruin it for the little kids and community at large.

Shortly after getting to the park I  noticed spray paint on the slide but couldn’t make out what it said until I got right to the slide. There were also the usual insults about others scrawled on various toys and of course the obligatory crude drawings of genitals.

Luckily for me my two little ones didn’t notice. They were just happy to have a nice enough day to go to the park and play, but it made me sad. Why is it that kids feel it ok to deface public places that smaller kids frequent and do these kinds of things with absolutely no regard for the little kids that it has the potential to affect? Again I’m glad that my boys didn’t notice or if they did that they didn’t say anything. So I’ve decided to call the city and report the defacement but it would be nice if I could call the city instead to register a complient rather than a complaint. 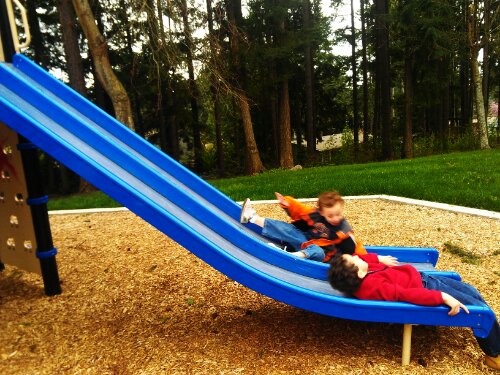 A collection of photos taken by an amature cellphone photographer

Showing America how to Live

Not a "how to be a great parent" blog

Musings on a mad world

Trying to live a creative life

the CITIZENS of FASHION

The writer gives life to a story, the reader keeps it alive.

Conversations with the Heartmind